The State of New Hampshire sets a Fire Danger Level every day. This is to help make it safer for burning. Before you kindle a fire, you must have a burning permit and you must check the daily fire danger status located on the NHDFL website or by calling toll-free 866-643-4737.

Open burning may be suspended by the State of NH Division of Forest and Lands or by the Lebanon Fire Chief when the fire danger is predicted to be a Class 3 or greater. The following is an explanation of the fire danger rating chart:

When the fire danger is "low" it means that fuels do not ignite easily from small embers, but a more intense heat source, such as lightning, may start fires in duff or dry rotten wood. Fires in open, dry grasslands may burn easily a few hours after a rain, but most wood fires will spread slowly, creeping or smoldering. Control of fires is generally easy.

When the fire danger is "moderate" it means that fires can start from most accidental causes, but the number of fire starts is usually pretty low. If a fire does start in open, dry grassland, it will burn and spread quickly on windy days. Most wood fires will spread slowly to moderately. Average fire intensity will be moderate except in heavy concentrations of fuel, which may burn hot. Fires are still not likely to become serious and are often easy to control.

When the fire danger is "high," fires can start easily from most causes and small fuels (such as grasses and needles) will ignite readily. Unattended campfires and brush fires are likely to escape. Fires will spread easily, with some areas of high-intensity burning on slopes or concentrated fuels. Fires can become serious and difficult to control unless they are put out while they are still small.

When the fire danger is "very high," fires will start easily from most causes. The fires will spread rapidly and have a quick increase in intensity, right after ignition. Small fires can quickly become large fires and exhibit extreme fire intensity, such as long-distance spotting and fire whirls. These fires can be difficult to control and will often become much larger and longer-lasting fires.

When the fire danger is "extreme," fires of all types start quickly and burn intensely. All fires are potentially serious and can spread very quickly with intense burning. Small fires become big fires much faster than at the "very high" level. Spot fires are probable, with long-distance spotting likely. These fires are very difficult to fight and may become very dangerous and often last for several days. 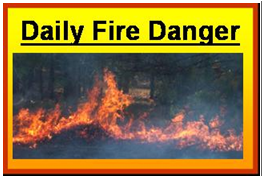